Doctor of Ministry Spring Plenary Session I with Dr. Lester A. McCorn 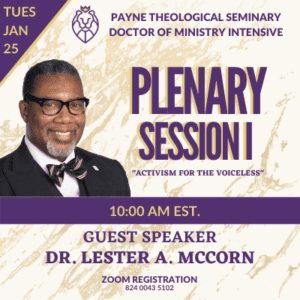 The week-long intensive plenary sessions will focus on Black Church Activism. The first session will delve into Activism for the Voiceless. is presented by Dr. Lester A. McCorn.

Register for the Doctor of Ministry Spring Plenary Session I with Dr. Lester A. McCorn here.

Rev. Dr. Lester A. McCorn is a visionary leader, activist, scholar, author, and administrator. He is the 13th President of Clinton College, a private historically Black college (HBCU) founded in 1894 by the African Methodist Episcopal (A.M.E.) Zion Church. The College is in Rock Hill, South Carolina, just south of metropolitan Charlotte, North Carolina. Newly branded as “A Beacon for Leaders,” the New Clinton has experienced dramatic growth in student enrollment and has implemented new programs focused on student success, including a new Academic Success Center. Under his leadership, Clinton College has received several major grants, including a $3.5 million grant from the U.S. Department of Health and Human Services to address health disparities, a $500,000 Distance Learning Grant from the U.S. Department of Agriculture, a $200,000 grant from the National Science Foundation, and a $400,000 grant from Savannah River Nuclear Solutions. The College is currently executing a transformative $25 million campus building program, beginning in the Fall of 2021, with the construction of a new residence hall, dining, hall, president’s residence, and Academic Success Center. In addition to a new online global learning program, the College is expanding in twenty satellite learning centers in rural areas of South Carolina.

Dr. McCorn is a highly sought-after preacher, lecturer, and public speaker. He is an ordained elder in the African Methodist Episcopal Zion Church and a former pastor of churches in Baltimore, Atlanta, Chicago, Boston and New Haven, Connecticut. He is the author of “Standing on Holy Common Ground: An Africentric Ministry Approach to Prophetic Community Engagement” (MMGI Press: Chicago).

President McCorn is an alumnus of Morehouse College, Yale Divinity School and Chicago Theological Seminary. He holds the Doctor of Ministry (D.Min.) from United Theological Seminary, where he was a Gardner C. Taylor Fellow in social justice and prophetic leadership and Adjunct Professor/Doctoral Mentor. He is currently a candidate for the Doctor of Philosophy (Ph.D.) in Ethical and Creative Leadership, with a specialization in Martin Luther King Jr. Studies and Social Change, and a certificate in Educational Leadership at Union Institute and University in Cincinnati, Ohio. He has done further study at Boston University School of Theology, University of Chicago Divinity School, Garrett-Evangelical Theological Seminary and Columbia Theological Seminary. President McCorn was a part of the 2019 cohort of the Harvard University Seminar for New Presidents. He was named one of “The 10 Most Dominant HBCU Presidents of 2019” by the HBCU Campaign Fund. He also holds a certificate in Community Building Strategies from the University of Baltimore.

While a student at Morehouse, Dr. McCorn was featured as a member of the Alpha Phi Alpha step team in the iconic Spike Lee movie “School Daze”. He is married to Mrs. Charlene M. McCorn, an elementary school teacher in Fort Mill, South Carolina. They are the proud parents of four adult children and three grandchildren.